Just a little thing which you might find useful.

Next time you have a hexmap you need to stock, roll a d6 on the Wilderness Stocking Table for each hex. 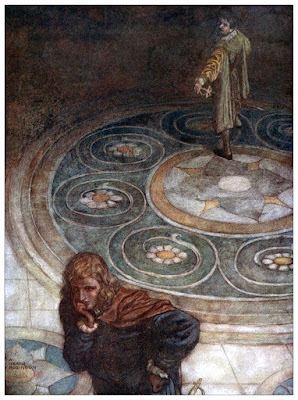 At the request of the most wonderful Jojiro, here's a post where I frantically flit between two PDF's, trying to trace the more significant changes that made it into the latest update (even though I can guarantee there was all kinds of flip-flopping between then) to my GLOG hack, Runaway Princesses. I won't include all the minor changes, but just try and give a decent, general overview.

Advice for Players: Elaborated advice in the form of Principles, included some concrete advice for IRL things (my personal favourite - Each Session is a Party). It says it's for Players, but really it's for the table. Maybe I should change that.

Proficencies: Skills, backgrounds, saves, weapons, and specialist equipment have all been streamlined and unified under one (fairly) cohesive banner.

Ancestry: Made up of two parts - your Species + Culture (might be the same if you want to be general). This means you can have a Human brought up by Dwarves (like Carrot), or do specific cultures, like Sylvan Elf, or both Gnome (Drow Elves).

Species and Cultures: The Ancestries of the Realm, by Mercutio Valentine, Troubador: An in-fiction book, video-game style, outlining some ideas for species and cultures for your game. I've done it like this to be anti-canon: Since it's in-fiction, you can ignore it as someone elses fiction. Since it's by Mercutio Valentine (my Dandelion/Jaskier and Tryst Valentine style NPC), it's inherently untrustworthy and can be ignored as nonsense whenever is convenient - "Don't believe everything you read - especially it comes from that Bard's big mouth..."

Starting HP: Rolled by default (may re-roll 1s and 2s). Taking the max value is now explicitly optional, rather than an option on par with rolling. Inspired by this post.

Classes: All of them have undergone streamlining.

Barbarian: Has become Berserker. This was a head over heart choice. I've always considered Barbarian more of a background than a class (I didn't grow up reading Conan), but kept it anyway because Barb is fun to say, and because we sing Bar-Bar-Bar -- Bar-Barian at my table and it makes me a very happy boy.

Rogue: Significantly streamlined - no more Archetypes, just Rogue Talents. No Void Assassin - this should be a separate class probably.

Saves: are back. Distinguishing them from checks made them clearer in play. They're still very similar in function to checks, and that's mentioned in the book, to reassure players.

No Encumbered: You either have free slots, or you don't.

Ready + Stowed Capacity: Minimum for each in case you roll a ridiculously low Strength.

Combat: More emphasis on thinking fiction-first in the presentation. Tell the GM what you want to do, they'll tell you what you can get done in the turn. Generally, you can perform two significant actions per turn. Inspired by Mothership.

Dual Wielding: In the last version, it let you attack twice per turn. Now, you attack with both in the same attack, but with D* unless you have 13+ Dexterity. Then, to represent attacking witht two weapons, you roll damage for both, and take the highest. Still don't know which version I prefer - let me know if you have any thoughts.

Combat Manouevres: A specific procedure. Now if you fail, opponent gets a free counter-attack. Before, it was just "make a ruling - if in doubt, opposed check". Having a specific procedure means you can play with it when you make Classes, e.g. the Rogue. How that specific procedure plays is the tricky part though, and I'm not 100% on it.

Lethal Damage: Streamlined into Death at 10 + CON Lethal Damage and a 2d6 table. This whole spread changed sooo much, so I'm still not sure on it.

Stabilise: Gain Fatigue after waking up from having gone down and been stabilised.

Resting: A Long Rest heals all Lethal Damage. I actually think now, going through this, that I might revert to healing at a slower rate, since regaining HP is already pretty quick, and to emphasise HP being like Grit and Lethal Damage being like Flesh.

Party for XP: Everyone knows gold for xp - it's great. Everyone knows milestones - I think they can work really well, as long as the party are the ones setting their own goals, and the GM assigns XP or level ups depending on the significance of those goals. With that in mind, the community would be better served with an alternative system - Party for XP. I haven't yet playtested it, and only put it together very recently, so it might be terrible, but it's an option.

Level Up: Each level, improve one attribute score of your choice if you roll over it with 3d6 + INT. Instead of a level track - we have levels 1-4, and then what you get at each additional level after levels 1-4, like I've seen in other GLOG hacks like the brilliant Princesses & Pioneers. This implies the natural arc that GLOG campaigns take on, which I think it's a great feature. I nearly wrote this out explicitly because I think it works very well for structuring campaigns, but didn't think it was worth it to be able to keep XP and Advancement on the same spread and still have some cool art.

I think that's some of the main stuff, alright byeeeee! 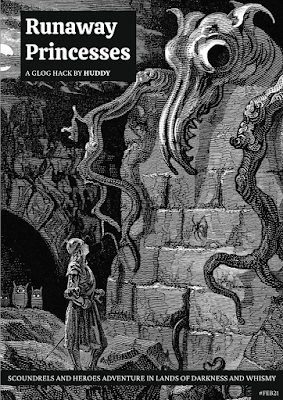 THE PRINCESSES ARE ESCAPING

Hello everybody! Forgive the caps lock on the title, I'm just really quite excited. Here's a big update to my GLOG hack, Runaway Princesses.

Nearly everything has been looked at and made cleaner, faster, and more interesting. This version also includes 6 core classes in the main book. If you want Wizard spells, and them in handout form (I find players prefer this format) in the Class Folio (not an 100% match with the interior book, hopefully have that updated by the end of the week, along with some inspirational art for male characters to sit alongside the female ones. If in doubt, use the version you prefer).

FYI: Below is an edited version of an earlier RP outline.